As I relax on the couch tonight recovering from the Bop to the Top stair climb in Indianapolis, Indiana, I can’t help but to recount the day and a great event.  As many know it’s a goal of mine this 2014 “season” to hit as many different venues and states as possible and this was a great new find for me.

The first climb of the year, my intent with this and the others leading up to the Scott Firefighter Stair Climb in Seattle was for training and evaluating my pace.  There were a few options; individual, team, and triple step (climb bldg. 3x) and I opted for the triple, how often can you climb 108 floors?  In my first-due area the answer is not at all.  I look at every climb leading up to it as another way to get me prepared.

After finishing my second ascent on the triple step it hit me that I was feeling pretty good and I was very interested in seeing what my time would be in just running clothes.  Having never attempted a building climb in running shoes, shorts, and shirt, curiosity had gotten the best of me.  By the time I came down from climb number three I was on the runners high and convinced that I was doing it, so I signed up.   Some people thought I was crazy, except for the other climbers that were doing the same thing.

It felt weird and I felt light and almost naked as I approached the starting line of stairwell A.  I must have checked myself 10 times to make sure I hadn’t forgotten anything, but all I needed was running clothes and the iPhone.  There were no boots, gear, helmet, etc., just the steps and me.  The steps were easy, even after dragging up them in full gear three times, and I fully understand how some of the elite can swing themselves around the stairwells so fast.  I won’t lie, by the time I hit the top I was winded, but it was a much faster pace.  I went from a 10:40 at best down to a 7:27 time for the 36-floor tower.

Overall this was an excellent climb that is well worth checking out.  This is the 31st running of the event and I must say one of the best that I have participated in.  It was a great venue, nice staging area outside the stairwells, and plenty of volunteers to help out throughout the day.  I found no shortage of food, water, awesome people to meet with, and the ability to share with one another why we were there.

If there is something that I could pick apart about the event it would be the torturous heaters every so many floors in the stairwell.  While they were only every so many floors it definitely provides a little motivation to keep on moving past them.  You need to check this out if you are in the Midwest at least once!

My advice to the climbers at this building, grab the Jolly Ranchers from the candy dish.  It wasn’t until I heard everyone dying at the top coughing with “burning lungs” that I realized the forced air in the stairwells was pushing every bit of dust into the faces of the climbers on their way up.  There is no way to avoid them, short of the runners that I saw wearing masks on the way up.

Thank you Indy for what was another wonderful stay in your city.  The next time out will be for the 9/11 Stair Climb at FDIC in April.  While I have many climbs in my future for 2014, this will be one that I definitely add to my list to go back. 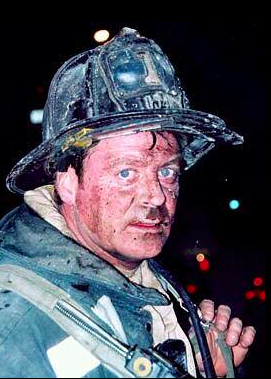 Its not my first stair climb that I’ve participated or competed in as a firefighter, but maybe this years 9/11 Memorial Stair Climb at FDIC in Indianapolis will mean even more (if that’s possible).  The 9/11 climb isn’t competitive, at least outwardly anyways.  There is no timing, no bib numbers, and there is no true finish line, it is to take time and step off the number of floors that our fallen brothers did on September 11, 2001.  Visually, physically, and mentally it is impressive and a great way to honor our brothers.

I’m only eight days into the 2014 year and already FF4Cures is looking for climbs and races to benefit great causes and pay forward in remarkable ways.  I had been putting together an event calendar for a few weeks of where I wanted to head this year and anticipating the opening of the 9/11 climb at the Fire Department Instructors Conference.  According to the counter on the website that tells how many fallen left there were to climb for I was one of the first ten or so to register.  As I went down the list of firefighters I wanted to choose someone whom I had not climbed for or carried their tag in the past.  This wasn’t my first climb, but with 343 that still leaves many to choose from.  Since 9/11 I’ve seen the names many times, and scrolled randomly just to read them and think.  I stopped when I got to the last name O’Keefe, now there is a firefighter name that stands out, I told myself.

So I pulled up Brother Patrick O’Keefe on one of the many memorial sites that are out there to read briefly his story.  He started with Ladder 35 as his first assignment out of the academy before being transferred to Rescue 1 later in his career.  I’ve ran across countless stories and rescues over the last day where he was involved or had some part in.  He clearly left a positive mark and impression wherever he went.  O’Keefe was 44 when he answered his final call on September 11.  He was married for 22 years and left behind a wife and two children.

As a firefighter who lives for technical aspects of a good grinder, rescue, or incident, climbing to honor a brother from the esteemed Rescue 1 was a perfect choice.

Reading up on Brother O’Keefe didn’t prepare me for what happened after I registered for this years climb.  As I typically do, I posted through Facebook and Twitter about the event to spread the word and get more interest about it.  Within the first hour after posting I had a message from a Captain on a neighboring department to ours letting me know of his relation to the brother whom I was climbing for.

Typically for the 9/11 climb we are assigned an ID type badge of the brother we are climbing for, but for this one I don’t think that will be enough.  I’m looking forward to sitting down and finding out about him and making this even more personal.

If you’re headed to FDIC, the event is held on Friday and it will take some time out of your day, but I can’t think of anything better than this.  Below is the link to the stair climb webpage to register directly for the April climb at FDIC.

The FitBit One tracks your steps taken, calories burned, distance traveled, stairs climbed, and hours/quality of sleep.  It is powered by a rechargeable battery, syncs online so you can track all of your stats, AND lets you record activities and nutrition!

I personally own this device, I got mine about a year ago and it is absolutely a great tool to add to help get/keep in shape!

Buy a ticket and help raise money for a good cause!