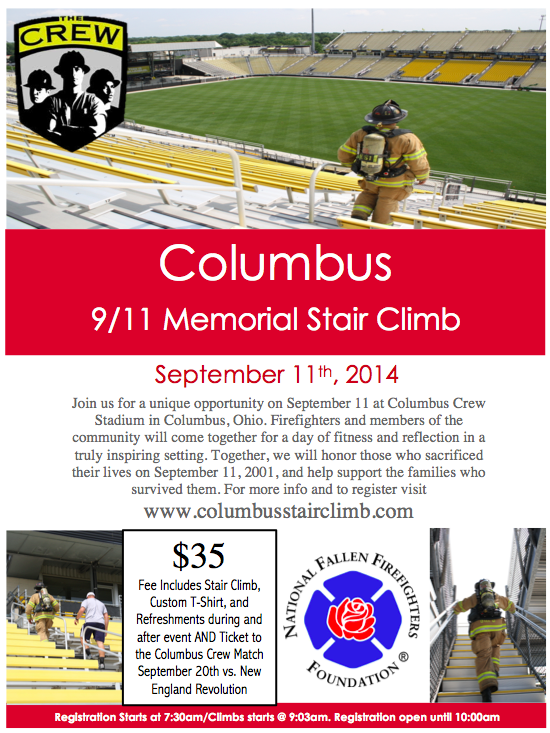 Brothers in Central Ohio, here is your opportunity to participate in a 9/11 stair climb coming up in just a few weeks.  As many of you have seen following the blog or talking to me over the last few years, these 9/11 Memorial Stair Climbs benefit the National Fallen Firefighter Foundation.  If you are in Fire/EMS you really can’t pick a better organization to put your backing into, because they are there when the unfortunate happens and we need them.

There is no reason not to participate in the Columbus, Ohio climb on September 11 at Crew Stadium, unless you’re on shift.  Its within driving distance of many that I know and takes a few hours out of your day.  A little sweat, a little work, and all for a great cause.  This is not a race; this is a climb in memory of our fallen brothers and at a totally different pace.  The event takes you 110 floors.  In most cases you’re repetitively climbing a building, in this case you’re climbing up/down throughout the Crew Stadium and you do it in full gear.

I have seen the youngest children to the oldest veteran firefighter that you can imagine complete this climb.  I have seen firefighters in top physical condition to those that think being round is in shape.  You can do this, you can complete it, you will be encouraged and you will be motivated.  If your experience is like any that I have seen in several states it is overwhelming.

You are climbing for either an assigned or chosen brother and along the way you will encounter heat, physical stress, mental stress, and if you let it, some emotions that will surface.  The feeling is truly amazing and a great way to share in some Brotherhood and build bonds.

Maybe by the end of the climb you will feel different and take that back to your firehouse with you.  Perhaps you’ll be thinking what should I do about my personal health and fitness.  I know that after I did my first 9/11 climb that even being in shape I knew I had a long way.  Another great thing I always take back is meeting new family from other departments and sharing in the day. 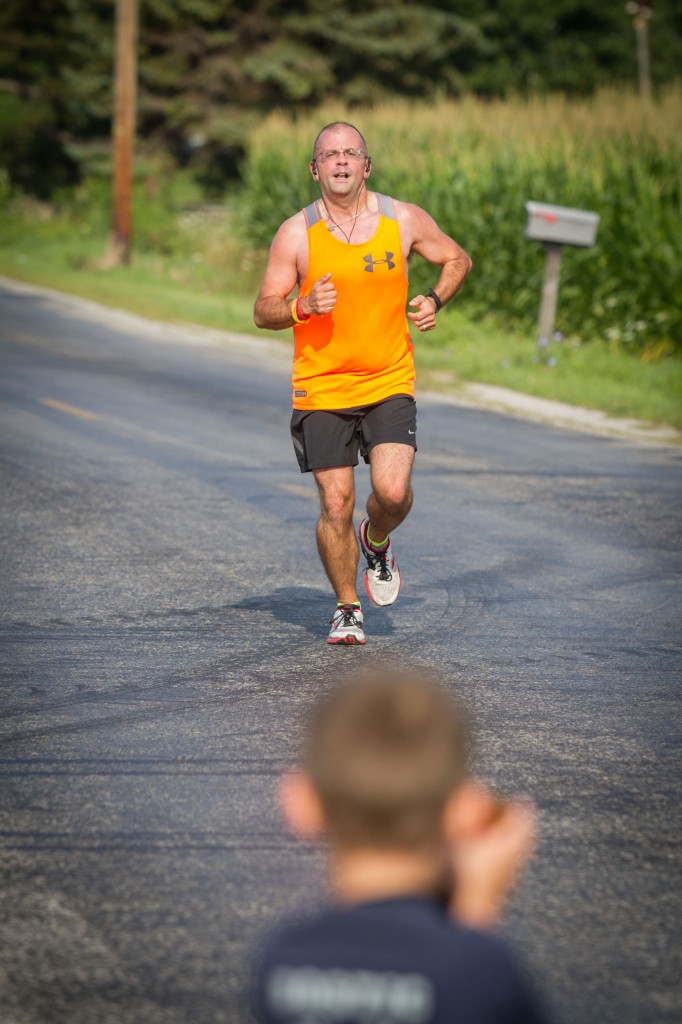 I’m very happy to be putting together this post after recovering from the event at the Central Joint Fire District in NW Ohio this past Saturday morning. I competed in the Five Alarm 5k to benefit the American Lung Association and for a very local cause and event. What a day to be back at my old firehouse for a Brother firefighter who lost his dad to lung cancer. FF Donnie Zeigler and his Brother Lt. Danniel Zeigler put together this event and this was the second year of its running. What a way to pay forward and honor your father, always great to see others doing this and making a difference. When I saw the opportunity to run there, there was no doubt that I was going to make it happen for brother firefighters doing exactly what I champion for and encourage others to do.

The alarm at 0500 was quite the early wake for the run, but the weather was perfect for a morning run and I had plenty of time to get into the game by the 0900 start. I was met by a great house of firefighters for an event in its second year that you can tell was ran with plenty of heart. Well ran with great event shirts and plenty of space to get out of the sun and stay cool until race time. There was no gun to start the race, no whistle, no horn, but the bell from the old station. I headed out on the flat course (what isn’t flat in the BG area except Bill’s Hill?) and felt great. The physical prep the last few weeks had helped immensely and the mental prep the last couple days drove it home.

With the sound of the bell, I was off and running (literally) and I felt awesome. I had but one person ahead of me, and let me tell you what kinda of a boost that is when you are usually surrounded by tracksters that are flying by.

I avoided the urge to look back and see what I had coming up because I didn’t want to focus on that, only the person ahead and why I was running. I was running for a lot of things, first and foremost to always challenge and beat my own best, but this was personal.

Maybe it was coming to my old house and wanting to do something that I never could have done 14 years ago. Maybe I wanted it bad because it was a flat course and I was aching to see just what I could turn out, but there was more. This past week, we lost a brother in Indiana, an Assistant Chief to a building collapse LODD. Brother Jamie Middlebrook of the New Carlisle F.D., 41 years old, and a veteran firefighter of 20 years made the ultimate sacrifice. Normally I click on and read the story of what happened and post, but his story captivated me as he was not only a Leukemia (AML) survivor, but also competed for the Leukemia and Lymphoma Society and in fundraising events for research. I never ran with or competed with Middlebrook, but from the people that spoke of him, he was someone you wanted to be around. I thought about him and how someone who makes such a difference being taken away, and it pushed me. Truth be told, for every climb, run, or event there is just as much mental as there is physical prep for me and it works…in the case of Saturday it worked well.

I knew when I got to Mile 1 that I was running my fastest yet at a 7:20 pace and needed to be mindful of my speed that I be able to continue for the remainder of the race. I had to look twice because I thought for sure I managed to screw up my watch, but the time was right. It wasn’t just a little faster, it was 22 seconds faster. I finally managed to peek back briefly, and was certain people were closer. It wasn’t until I got to the turnaround, snagged a cup of water, and refocused while not slowing down that I had second place by a large margin. I don’t know that I have ever smiled so much as I was at that point. I was no where near the first place person as she pulled away, but I was ok with that because a goal that I set years ago was within my reach. I cheered others on, I made noise, and I kept going. At Mile 2 I was still holding my own and not huffing and puffing.

As I turned onto Mermill Road headed east I got a reminder of the NW Ohio winds as a light, but noticeable wind hit me in the face. The first place person continued to distance herself, and while I knew she was out of reach that my goal was right ahead of me. With the finish line in sight, I changed my song, and heightened the pace to a strong end. My son Jonas was standing along the road with a bunch of other kids and firefighters cheering us on, I don’t need to tell you how good that felt.

As I crossed I was handed the second place stick and knew that I was close on a PR. I collapsed into a little heap in the grass to cool off a little and speculate what my official time was. It was a long 15 minutes before I knew the time for sure and I couldn’t stop the excitement. When the times were recorded I finished with a 24:47, which was five seconds better than the July 4 race and took second place overall! While I’m used to chasing and now hitting new PR I have waited years to place.

What an exciting day of racing, Brotherhood, and doing something bigger for a good cause. I’m looking forward to next years race at CJFD, but even more so I am looking forward to pushing myself even harder. Work at these events will push and make me better for Seattle and open new doors for me.