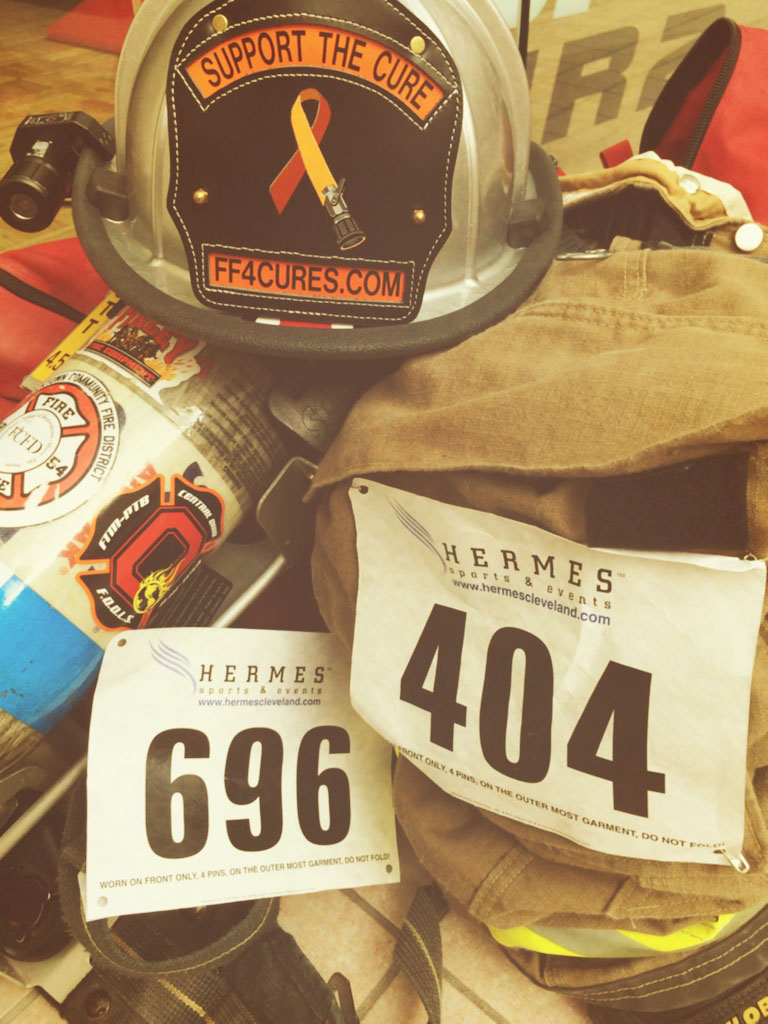 In sticking with my goal late in 2013 of hitting as many different climbs, venues, towers, cities, and states, this past weekend pushed me even further.  I traveled on Saturday morning to downtown Cleveland, Ohio for the 12th Annual Tackle the Tower climb benefitting the Ronald McDonald House.  This was the first time in the city for a competition and definitely one that I will keep on my list to come back for.  Whether you are new or a seasoned veteran of climbs this is one to check out!

Registering for the event as a firefighter was simple, so was going back in five minutes later and registering as a civilian racer.  I was concerned it might flag that I was registered, but it worked with no problems.  Getting in touch with the event coordinators on the Friday before the climb was equally as easy.  They posted our start times, and the firefighters were missing from the list.  A quick call and great communication from the office had me the answers I needed.

Arriving on the morning of the event, the air was cold and crisp as the wind blew off the lake.   Parking was a snap and gave great overlook of the tower area to see where I needed to be.  Getting my bib numbers and finding a spot to setup camp at was a breeze.  Even with nearly 1000 racers there, the Galleria was still quite open and had plenty of room for us to spread out.  The snacks and hydration were plentiful, as was the help when you had a question or needed something.

When it came down to a delay in the event there was a volunteer or coordinator that worked his way through the Galleria and staging area to let us firefighters know we were going on about 22 minutes later than planned.  To most that doesn’t seem like much, trying to keep warmed up and stretched, but for us it was doffing the gear, keeping cool and stretched.  Speaking of warming up, there were plenty of places to run around, steps to climb, stopped escalators to climb, and generally a great way to get ready.  The “paddock” area to get into the stairwell got a little cramped at times, but it still kept moving and allowed family to be able to see you and cheer you on.

The actual climb in this building itself was one that I think sets it apart from others.  You have a long first flight of stairs before making the turn going clockwise before starting the main stairwell.  After that, the small groups of 4 stairs that were mid-landing were a nice addition to quickly swing up and clear with no problem.  I haven’t seen that in the various towers I have done to date and definitely like it!  The temperature in comparison to other tower climbs was much lower and no surprise heaters to try and bake you on the way up.   As I continued my way up there seemed to be a decent amount of space for passing and for the water break people to setup shop.  The finish line wasn’t much to speak of as they snagged your pull-off from your race bib and scooted you down the hallway.  Perhaps my only disappointment with this climb was that you couldn’t get to an exterior window to look out because of the offices.  If you want a photo op looking down, you’re out of luck.

For my second climb of the day I had about 45 minutes to hydrate and get ready to Tackle the Tower once again, this time in just typical running gear.  This was the second time I have done a tower climb with, and then without fire gear.  I was very pleased with my time, setting PR for both runs for a building this size.  I felt fast, I felt light, and it was a great run.

If you’re in the state next year during this time, make sure to add this one to your list.  A low fundraising minimum for a great tower that’s ran well.