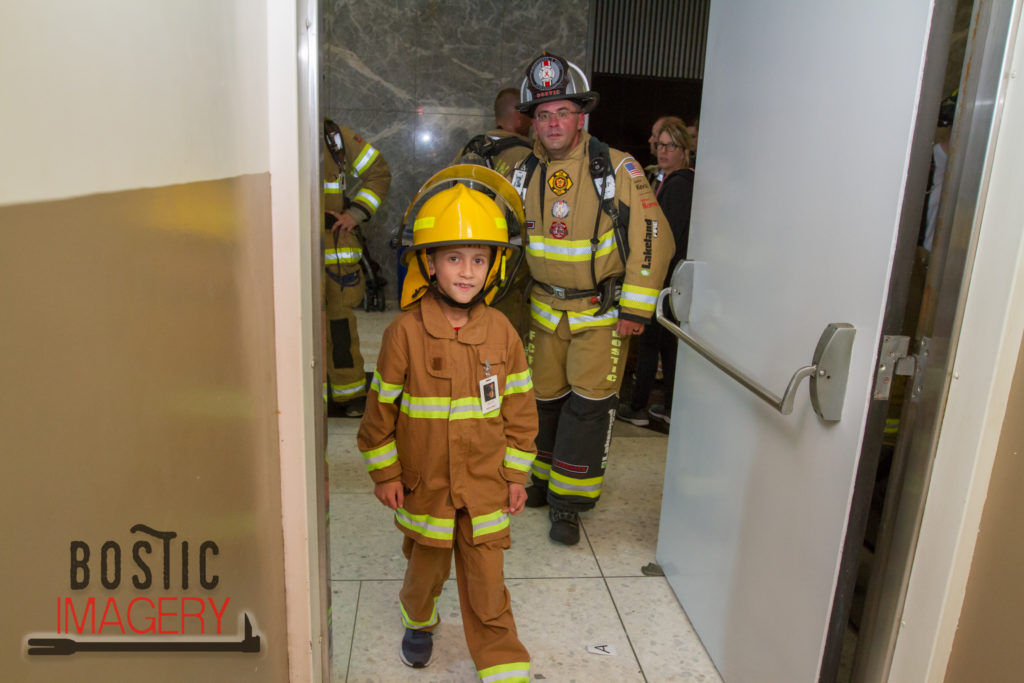 I penned a slightly abridged version of this in response to a social media post regarding the 9/9/2018 Columbus 9/11 Memorial Stair Climb that I read yesterday.  The jist of posting showed a firefighter only Memorial Stair Climb showing firefighters stopping for each other, checking on one another, and trudging along at their pace.  As quoted, “Take note there is no one pushing past each other in the stairwell causing safety issues. Hint hint Ohio 9/11 stair climb organizers.”  The posting goes on to comment that “organizers who don’t even participate in the event combine those not in turnout gear that move much faster than those as we see here. That gives a very unsafe element to that event.”

I will say that again, I was not an organizer of their event this year, however as a skilled and seasoned climber the last thing that I want someone to get is the impression that the climb is being ran in an unsafe manner and see a decline or problem encouraging people to participate.  If I thought it was unsafe, well firstly I would have said something, secondly I would not have let my eight-year-old son participate (this was his fourth climb).

I’ve seen firefighters in full gear do the entire thing on breathing air, geared up but not on air, wearing SCBA only, climb in their station shirts and shorts, station gear, SWAT members in gear, military with full ruck, Crossfit with plate carriers, civilians with baby carriers, and people of ALL ages.  I’ve seen people at a snails pace, and I’ve seen professional stair climb teams race through it and cheer us on the entire time.

For me, it was climbing in my competition gear (yay to no carcinogens), wearing my Scott Pak, and climbing along with my son Jonas who was in his set of gear.  He’s not new to understanding 9/11 and knowing about that day (to a kid appropriate level), he’s not new to climbing and being around a firehouse either.  We chatted the entire time about that day.  He pushed me, I pushed him, we pushed and encouraged others.

How we remember September 11th is a very personal choice, but I think the MOST important pieces are that we DO REMEMBER, WE NEVER FORGET, WE HONOR THEIR MEMORIES, AND WE PASS DOWN THE STORY.

Saw the post and thought I’d hop in here.  As a participant of stair climbs around the United States (and now international as well), ambassador, climb organizer/committee person I wanted to chime in with what I’ve been a part of doing for 13 years now.  I am not on the committee at the Columbus 9/11 Stair Climb, however have participated in the Chase tower event twice now.  I don’t know 100% of everyone involved with the planning of this year, but know several of the minds that have been a part of this DO climb or have DONE climbs elsewhere.  This year I climbed the Chase building with my son.

Firstly, not all climbs are equal.  I will say that civilians in with firefighters happens at almost every climb that I have been to, unless it is strictly a firefighter only event.  I have yet to see a civilian climber cause injury to a firefighter in the stairwells as a part of passing, maybe that’s luck, I don’t know but I’ve been in some of the smallest all the way up to the nice wide stairs of WTC1 Freedom Tower.  I’ve seen my share of people slip in water, sweat, puke, and simply collapse on their own. As someone who is directly involved with the worlds largest firefighter climb event where FF are passing at all rates of speed, I just don’t see the injuries.  Annoying to some maybe, but I’ve seen those civilians push us along at climbs all over. I’ve seen them keep us going when we wanted to give in, stop, and not complete our climb.

Hats off to anyone that wants to challenge themselves to a grueling climb of 110+ floors in memory of our fallen and those lost on 9/11.  Are the ones racing and pushing their bodies as a part of their gym WOD disrespecting our fallen?  I’ve pondered that at many of the climbs I’ve been in, and after meeting and talking with many of them, hearing their stories, and seeing them struggle as much as us, I would say no.  For the greater part of them I would say no they aren’t being disrespectful.  At these events from coast to coast I have met former military, active military, law enforcement, family members of our fallen throwing on plate carriers, rucks, and pushing their bodies to the top, none of which I would call disrespectful.

This year, the event grew so much at Columbus, it was amazing to see the numbers that were had. Mother nature decided however to screw with the plans and forced everyone and the ceremony inside.  I can’t fault the event for this unfortunate problem. Yes it was packed.  Yes communication about who went where was a little harder to disseminate because pretty much you were on top of each other in there from the start.  I started out the first lap in the stairwell with mainly FF in it, no problems other than the typical puke and elevators being packed with people at the top.  For ascent number 2-5 we went to the other stairwell that had more civilians that were going up and down.  Little less smell of puke.  Little faster pace.  Less jam at the top of the stairwell.  Saw people passing both up and down, never saw a single firefighter or civilian injured from a trip or fall from this.  Water and sweat slip hazards, yes, but that’s in every event out there like this. The cooling fans from whomever sponsored this one were AMAZING and definitely want to look into a few of these for size.  Water was readily available.  Cooling station at the bottom with all the fans was a nice idea.  If you didn’t cool enough there, step outside.

All things considered for their third year in the Chase building I think that the organizers did an amazing job with the curveballs dealt this year.  Had the weather not forced things inside I would probably say it was the best they’ve done thus far.  That’s the thing, stair climbs, runs, they all have issues at some point.  Every year you’re going to find something, otherwise if they were so perfect and simple WE WOULD SEE EVERYONE DOING THEM.

Kudos to those involved with keeping Chase as a partner for the event like they are.  Getting a building to “let you in” and do an event like this is quite hellish. A lot of cleaning needs to occur, there is the liabilities, the security risk, the chance of damage, and simply the inconvenience of it all.  Keeping the building happy is a huge endeavor in and of itself.

With better weather next year allowing everyone outside, I can see it being MUCH easier and the climb will continue to grow.  If it grows much larger they might need to look at moving to the Rhodes tower because of the larger lobby for staging and two stairwells.

Just my .02 for what its worth, but I’ve not seen anything that would keep me from coming back here to the event.  Great cause, good location, AMAZING turnout. 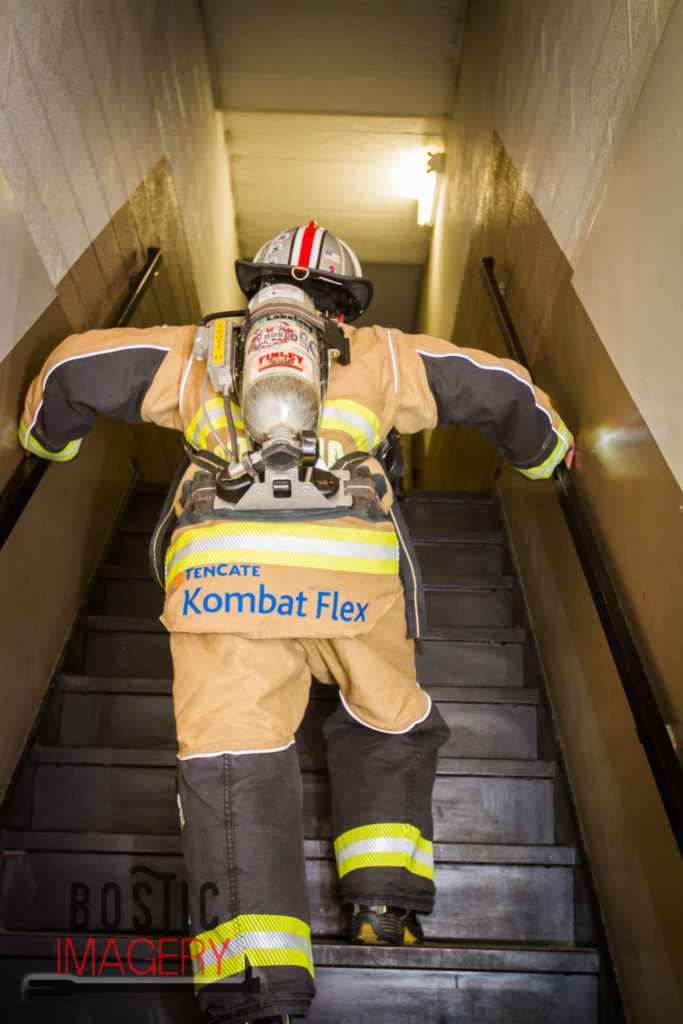 I’ve been asked this question a lot over the years at the competitor level, at the ambassador level, as an honored climber, or in the coffee shop.  Why do you climb, why are you doing these events?  As recent as this last weekend at the Columbus 9/11 Memorial Stair Climb I had firefighters stop and ask, “aren’t you that guy that does the events”?  Yep, that’s me.  “Why do you do it, where have you been to, what drives you, why participate?”   Yep, heard those and a million other questions.

From event to event there may be some differences in the answer that I give, the underlying foundation is the same.  First and foremost it is the ability to “Pay Forward”.  The iconic football coach Woody Hayes from The Ohio State University, made an amazing commencement speech in 1986 at the University on the topic of paying forward.

Coach Hayes encouraged the mentality of paying forward and that the graduates should, “take that attitude toward life, because so seldom can we pay it back.”  He went on to teach several other life lessons in his commencement speech that spring day and give examples of paying forward, but also many lessons from football that also pertain to life.  It was four years almost to the day that someone else followed the mantra of “paying it forward” by donating lifesaving bone marrow that cured my mother with little time to spare on March 14, 1990.

How can you not climb and compete?  Have you seen some of the causes we do this for?  Kids with cancer, adults with other diseases, people dying, suffering, other events that promote helping veterans, helping those with impairments.  How can you not get involved with that?  I did my first stair climb in 2007 and before the event even started that morning I knew I was addicted and wanted to come back. You hear from a child of their story battling.  You hear from a mother or father of the child they no longer have because they were taken too young.  Your battle with the stairs or the road race is minute, and then you get to relax and have a normal life.  Their battle continues.  When I comes down to it, when you see the faces of those that your work affects and how it can positively impact their lives, that is the real deal and gives you the “buy-in”.

I do it because, it’s the right thing.  Hey, so many times in our calling we see only the end results, we only see the bad days of peoples lives, we are focused on the task at hand.  We get focused on putting out the fire, handling the emergency and our mission is complete.  Being involved with many of the events, at least those in the role of a firefighter event lets us give back and put even more positive influence into the world. Some might say “using the office”, I look at it as just another very positive extension of the office and the oath that we take.

Whatever your reason is, stay true to it and be proud.  Share your reason, live your reason, and let that reason help encourage others.  Every one of these events out there didn’t grow to the level they are at without people sharing their mission, reason, goals, and joys of doing what we do.