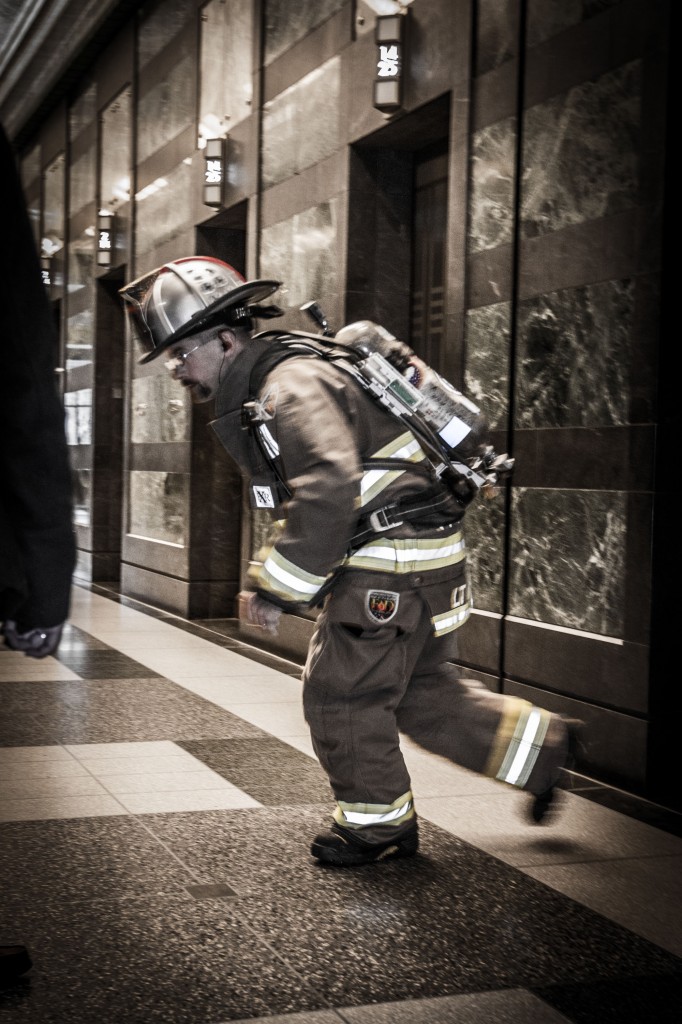 What a long and fast weekend this past one was as I competed in the Step up For Special Olympics stair climb in Philadelphia, PA.  This was my second time out there competing in the 53-floor climb up the BNY Mellon building in full firefighting gear.  Last year I spent a couple days out there and had a time of 19:39.  This year however after a lot more rigorous training and work I pulled together a very solid 16:38 time that I think I still can improve on.

Parking is always interesting there because there is no street parking near the building…at least none that we wanted to risk it on and that was probably the only downside at all.  Overall, this is a very well ran event with a great building to continue to grow and add more participants.  For the location, the number of climbers is surprisingly small for this time of year and the cost very small compared to other events.  I met a firefighter that made the trek up from North Carolina (wow) to visit friends and climb in the event.  It’s always great to compete with other firefighters and see those that are doing what it takes to stay #firefighterfit and do good.

Could have probably set the alarm a little earlier on this one, but after getting up at 5am the morning before and spending 8 ½ hours in the car I really wanted the downtime.  I started the morning out with a good meal of fresh hot oatmeal, fruit and yogurt and started hydrating well in advance.  Mental note to those new climbers, figure out where that event morning breakfast is coming from and what you want.  Get that water or hydration drinks and keep them in your room fridge for the morning!!!  You don’t want to be searching for last minute items on game day.

I arrived at the tower to get checked in with no issues at all and setup camp over around the perimeter where I could see the lineup, see other events, and hear the announcements.  Maybe I’m different, maybe everyone has their own way of doing it, but I like my own space to set things up and visualize it all.  Even if I’ve already checked everything out before I left home, upon arriving at the hotel, and that morning before I leave I want to know where everything is.  The hydration continued, as did a small snack about 30 minutes before the climb.  I did my usual pre-climb warm-up involving yoga, some running, and some climbing to loosen up the body.

I keep that gear off as long as I can when possible.  Even if others are lining up, the longer I can keep that heat off my body and regulate the temp, the better off I am.  With several people off ahead of me I geared up, turned on the cameras, and headed toward the starting line.  Don’t forget to take that bottle of water with you.  Even if you have to ditch it at the last minute, I’ve been to races where a delay held you up 20-45 minutes and wishing I had something to keep hydrating with!!!

I met back up again with Touche from North Carolina as we talked briefly before the climb.  A few more brief sips of water and it was my turn.  I was poised as the timer counted us down, releasing climbers every 10-15 seconds and when I heard GO I took off.  It might be a second, might be a split second difference, but that start is one thing I have improved on.  I maintained a nice pace for the first 25 before the heat started to really pick up.  Honestly the tower felt cool, which doesn’t happen very often.  By this point I also realized that I forgot the hard tack candy to keep from getting the “climber cough” from the stair well.  I continued on and relied on my arms to pull me through a few tough floors and drag up the steps and swing around the landings.

The last few floors were, “easy”, I guess you could say.  Either that or I was delirious and happy to be at the end so they flew.  The top of this building if you haven’t been there and are curious is not much to look at.  Its and office floor and you can’t access the outside windows for that cool finish selfie, but in my books is still an awesome climb.  I knew I had a sub 17-minute time so I knew I accomplished my goal, but it took about 45 minutes before I knew for sure.

Overall, great climb, and being able to have people at the finish line is even better!  I’m still looking for video that the news had from out there and hoping to see that FCFD or the FF4CURES website on the news.  I certainly have gotten some more exposure over the last few months and the hits to the blog show it.

I know where to make the improvements already for not only the next climb, but more importantly Seattle.  Every event is a training for something bigger and exactly why I keep at these, to GET BETTER.   I’ve got a busy Thanksgiving week with two races right now, another around the corner in December, and plans that extend into the new year.  I hope to have another article written here in the next few days to keep this fresh.